Prince George’s County was a divided land in the autumn of 1855. The long rows in tobacco fields vied with grains and fruits which in turn were in laced with pastures filled with cattle, sheep and poultry.  Agriculture was and had been the only industry of consequence for over 150 years. Large plantations were interspersed with small freeholder and tenant farms both struggling to make a profit. The rich soils of an earlier Prince George’s were growing tired for tobacco cultivation drained the soil of its vitality.  The destructive nature of tobacco farming on the land was multiplied by the corrosive practice of slavery which provided the manpower to plant, grow and harvest botanical gold for the planter families.

The divisions of its industry, in some sense, were reflected in the growing disintegration of expected social, economic and political norms. Whispers of abolition swirled around ancient suspect religions.  Enfranchisement of voters intertwined with suspicion of immigrants. Fear grew as change came faster. As the men and women of the Revolutionary Generation grew fewer and fewer, the fabric of their times began to unravel.

The two-party system that had grown-up with the country from its founding was being torn apart. The great Whig party of Henry Clay and Daniel Webster which had stood against the Democrat Party was fractured into its opposing interest groups.  The robust and vocal  social-conservative wing of the Whig Party had a fear of immigrants and “exotic” religions such as the Roman Catholic Church that led it to be wary of a strong central government. This “Know-Nothing” wing, formally known as the American Party, was opposed by the pro- business interest that supported government infrastructure programs and projects.

The local Upper Marlboro newspaper, The Planters’ Advocate published October 24th, 1855, ran two major stories on the political situation in the country as well as an article on a lost aeronaut in Ohio, reports on the winners at the county fair, and the Union Party slate for public office standing for election in November.

[1] Major slave owners were committed to the Union cause and would remain Unionists in the Civil War when present day expectations would have had them join the Confederate cause.

The Planters’ Advocate lists in a feature article the “false pretenses and errors “of the Know-Nothing Party.”We presume”, the author writes, “no one will pretend that their efforts to break up religious toleration are American in character”. The anti-immigration policies of the “know-Nothing” including their opposition to immigration because of the tax burden it imposes is pilloried as is their virulent opposition to Catholics. The anti-immigration party “would deprive [immigrants], after they get here, of political privileges.” The editorial indictment of the “Know-Nothings” pointed out the political pretence that “foreigners coming here compete with our own people and reduce the price of labor — which is false, as regards the Southern States, for the simple reason that we have no class with which they can compete.”

The loss of the Huron County, Ohio, aeronaut, Mr. Winchester, who went up in a balloon and never came down re reported with the ill-fated New York train that fell into a River when a bridge that crossed the Battenkill river collapsed. Murders and market reports round out the reporting. 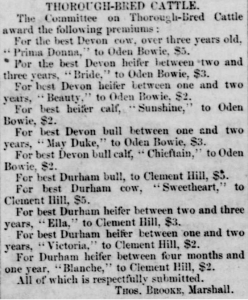 Outside of political considerations the local Agricultural Society reports provided information of major interest to the free citizens of the county. Oden Bowie of Fairview with his Devon breed, and Clement Hill of Compton Bassett with his Durham breed, swept the cattle prizes. John H. Bayne of Salubria took a prize in fruits along with the many other prizes awarded to various exhibitors at the county fair.