The 82 Line Streetcar was the original link that allowed strong communities to develop along the Route 1 Corridor in Prince George’s County and linked them to Downtown Washington, DC up until the mid-twentieth century. While the Metro Green Line exists today to serve the now transitioning suburban area, the streetcar’s removal had a big impact on the communities it served. Watch the Prince George’s County Historical Society’s first episode of Yesterday Today to find out more. 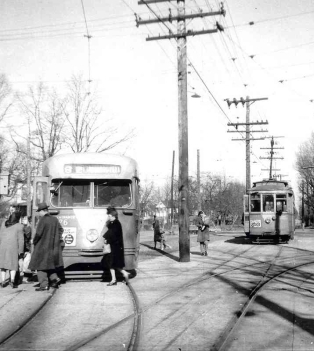 Competition from automobiles (and buses) resulted in a series of cutbacks in trolley service to the more distant suburbs. At the time of this photo, the loop seen here was new, having been added to accomodate PCC cars, like the one at left, which could be controlled from only one end. The older cars (right) had operator controls at each end; in the late 1940s they became relegated to shuttle service from here up to Beltsville. In this chilly winter morning scene commuters transfer from the shuttle to the newer vintage PCC car to complete the trip to DC. As you might guess, this (purposely?) added inconvenience must have done little to encourage ridership, and by the 1950s the shuttle to Beltsville ceased, leaving Branchville Loop the end of the line. PCC stands for Presidents’ Conference Committee, a 1930s group tasked with promoting the design of newer, better looking streetcars to lure riders. The cars became a common standard in many US cities, then spread to Europe and the USSR. PCC cars can still be found in operation in cities such as Prague. (Thanks to Herb Harwood for this PCC info.)